Free worldwide shipping on this item

Fine French first quarter bronze figure by François-Raoul Larche. The figure cast using the lost wax technique displaying two girls gathering flowers. The figures of naturalistic form with with the girl to the front holding a large amount of foraged flowers with the second whispering in her ear while leaning towards her. Signed to the base by both the artist and the casting foundry; Raoul Larche, 1912, cire perdue Siot.

Lot Notes: François-Raoul Larche was born in 1860, Saint-André-de-Cubzac (North East of Bordeaux) and died in 1912, Paris. He was a French Art Nouveau sculptor whose work included several figures of Christ and numerous female figures, both nude and draped. He was one of several artists inspired by the dancer Loie Fuller. One of his best-known statues depicts Fuller dancing with part of her drapery billowing above and behind her head like a flame. Another well-known sculpture, Les Violettes, depicts a group of nude children with an older girl who may be their mother or older sister. Their bodies are entwined with flower stems and leaves and they are all wearing petal bonnets, suggesting that they are meant to represent the spirits of flowers.

Siot (Siot-Decauville) refers to the renowned French art foundry which opened its doors in rue Villehardouin, Paris active between the late 19th century and the first half of the 20th century. In 1920 the foundry moved to avenue Victor-Emmanuel III in Paris. The foundry also had an exhibition hall first located on boulevard des Italians, then at 24 boulevard des Capucines in Paris. They specialised in high quality castings of which can be viewed throughout the world.

Lost-wax casting or cire perdue which has been adopted into English from the French, is the process by which a duplicate metal sculpture (typically silver, gold, brass or bronze) is cast from an original sculpture. Intricate works can be achieved by using this particular method allowing artists to duplicate original works with great effect. 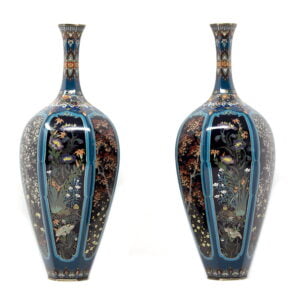 Click one of our representatives below to chat on WhatsApp or send us an email to info@jacksonsantique.com